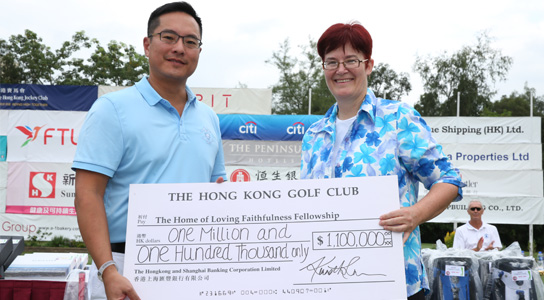 The Hong Kong Golf Club is a dedicated supporter of local charitable concerns and hosts numerous charity golf events throughout the year.

In 2016 alone, golf events held at the Club raised over HK$18 million for charity, a figure that the Club hopes to see increase this year.

Charities that have benefitted from complimentary hosting include some of Hong Kong’s most notable organisations: the Community Chest, Po Leung Kuk and the Tung Wah Group of Hospitals.

Additionally, since 1987 the Club has hosted its own charity golf event – the annual Cup of Kindness. Traditionally held in the latter months of the year and involving the participation of hundreds of the Club’s members, the Cup of Kindness draws sponsorship from a broad spectrum of Hong Kong companies to help raise much-needed funds for extremely worthy causes.

The 29th edition of the Cup of Kindness, which was staged in 2016, raised in excess of HK$3 million for the Sheung Shui-based Home of Loving Faithfulness, a residential care home for mentally and physically disabled young people; the Buddhist Po Ching Home for the Aged Women in Fanling and the Heep Hong Society, a multi-faceted children’s training and therapy charity with centres across Hong Kong.

The second edition of the UBS Hong Kong Open Charity Cup, which took place following the 2016 UBS Hong Kong Open, raised In excess of HK$3 million for the tournament’s charity partner, Friends of Asia Hong Kong, which distributed the funds to a number of extremely worthy beneficiaries, including the InspiringHK Sports Foundation, a charity that supports less-advantaged children by introducing them to a variety of sports coached by professional instructors.

In February 2017, the Old Course was the venue for the inaugural Club-sponsored Hong Kong Ultra-Marathon. This event raised money for the Hong Kong Single Parents’ Association and included a variety of running events for over 600 participants. One of the events was a 24-hour race which included a total distance covered world record attempt.